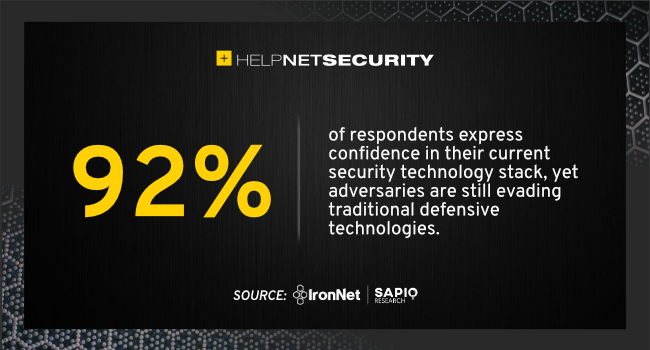 Cybersecurity posture confidence high, yet incidents are increasing too

IronNet Cybersecurity released a report assessing timely topics such as the estimated cost per enterprise of the SolarWinds cyberattack, executive-level engagement in attack responses, and the effect of information sharing on an organization’s overall security posture.

Sapio surveyed 473 IT security decision makers in the technology, public services, financial, and utilities sectors across the United States, United Kingdom, and Singapore.

The report revealed a complex relationship between the reported level of confidence organizations have in their cybersecurity posture and their ongoing attack volume and impact: that is, despite rising confidence, incidents are increasing, too.

While 92 percent of respondents express confidence in their current security technology stack, adversaries are still evading traditional defensive technologies. Nearly half of respondents cited a rise in cyber incidents in the past 12 months, in part due to the increasing sophistication of attacks; and the SolarWinds attack cost, on average, 11 percent of affected respondents’ annual revenue.

What is helping is information sharing