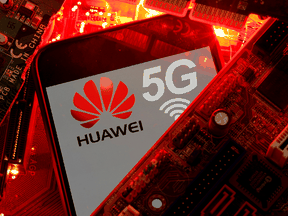 The Liberals have been postponing a decision on Huawei for almost three years, but with the recent release of the Two Michaels from Chinese prisons an announcement is expected to be made within weeks of Parliament returning on November 22.

“The federal government has no choice but to announce that Huawei will not be allowed,” given Chinese national security laws and the United States’ position on Huawei, former Canadian ambassador to China Guy Saint-Jacques said.

David Welch, a professor of political science at the University of Waterloo, was more blunt.

A ban was a “no-brainer,” noting that “all of our key allies have banned Huawei gear,” he said.

A major fear is that having Huawei equipment in Canada’s next-generation wireless networks is a security risk, especially considering China’s laws that state companies must cooperate with its intelligence services.

The cost of switching out Huawei equipment is now likely lower, because equipment has to be replaced over time anyway. Bell confirmed in mid-2020 that it had begun removing some Huawei equipment and replacing it with Nokia.

But for smaller player Iristel, which operates in Canada’s North and has partnered with Huawei on 3G and 4G networks, a requirement to rip out existing equipment would be “catastrophic,” said CEO Samer Bishay.

Even if the government goes ahead with a ban, national and cyber security experts warn prohibiting Huawei alone won’t ensure the security of Canada’s 5G networks.

In a report from University of Toronto’s Citizen Lab released last year, senior researcher Christopher Parsons also cautioned that banning Huawei “will not solve the issue of foreign operators conducting espionage, disruption, or attack operations against the Government of Canada, private companies, or private persons who rely on non-Huawei equipment.”

He said rather than trying to “solve a Huawei problem, the Government of Canada should develop an integrated set of industrial, cybersecurity, and foreign policy strategies.”

Stephanie Carvin, an associate professor of international relations at Carleton University, pointed out that the security concerns go beyond Huawei, given that “all 5G equipment has terrible cybersecurity flaws.”